You are here: Home / Internet / How To Stop YouTube Recommendations At End Of Video?

As part of a new update, Google Now includes a set of recommended videos at the end of a video, in the form of YouTube end cards. have decent cards maybe a useful way for the channel owners to promote their content and direct the users two other similar videos which they may find useful.

however, these end cards end up covering most of the screen generally, and users are not able to view the currently playing video in its full glory. here I shall discuss how to stop YouTube recommendations at end of video.

How To Remove Recommended Videos At The End?

One of the earlier methods which was used by a lot of users was modifying the embed link. instead of copying the link, users would choose the embed option and then add ‘?rel=0’ parameter at the end of the link which would turn off the suggested videos from the end of the video currently playing.

however YouTube quickly removed this feature, citing popularity as one of the reasons. according to Google, YouTube end cards were an important identification prospect of how YouTube works, so the ability to remove this was taken down pretty quickly. Thus, channel owners can freely add end cards to their videos, and the viewers cannot remove them even if they want to.

Thus, now you will need to apply custom CSS to the YouTube website, which can be done using the browser extensions. Here, we shall be using the Stylebot extension to apply a custom CSS code to YouTube.

As mentioned before, you will require a browser extension to add a new CSS to the browser. Follow these steps for the same: 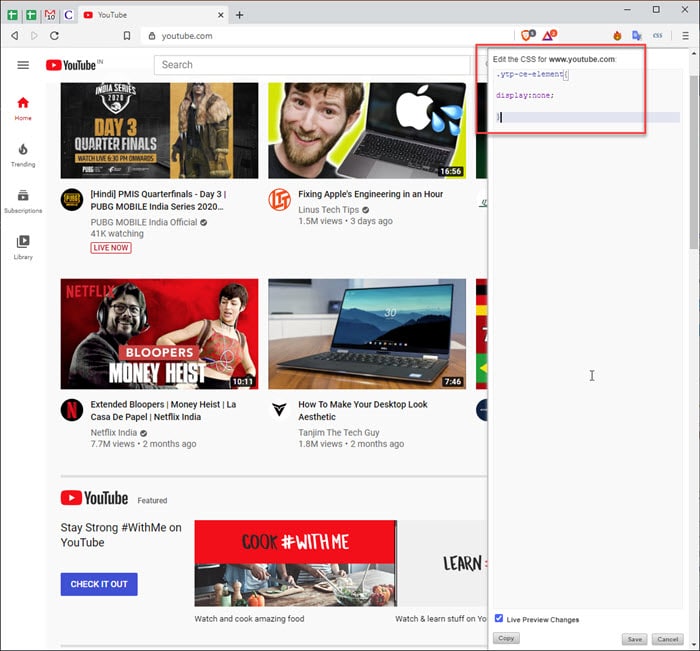 This will remove recommended videos at the end of a YouTube video, and you will be able to view the entire screen without any end cards.

So there you have it. Although there were some older popular methods earlier, we have not mentioned them here because of the everchanging nature of YouTube, which prevents that method from working for many users. At some point down the line, YouTube may also block changing the page settings and adding a CSS code may not work in the future. Now you know how to stop YouTube recommendations at end of video using the method provided above. Comment below if you found this useful, and to discuss further the same.