You are here: Home / Windows / How To Increase Dedicated Video RAM On Windows 10 Computers?

Many graphics intensive tasks such as high-quality video playback and games require storing the buffer frames on your memory modules. While your standard RAM can be used for this process, if you have a dedicated GPU, using a memory module closer to your GPU will provide faster speeds, and a better performance.

Video RAMs are especially important if you want to perform graphics intensive tasks on your computer. They usually come as a part of the dedicated GPU unit. However, if you cannot invest in a GPU unit, here I shall discuss how to increase dedicated video RAM on your Windows 10 computers.

Why To Increase VRAM?

Before adding a VRAM to your computer, you should understand what happens when there is insufficient video RAM available to your applications. What you need to understand is that how much dedicated video RAM you need depends on the application that you intend on running.

Dedicated video RAM functions similar to the RAM modules installed on your motherboard. However, instead of storing the data from the processors, dedicated video RAM is primarily used to handle the data processed by the GPU. Insufficient VRAM is detrimental to performance, while having extra RAM is useless.

If you want to run an application that requires 2GB Video RAM to buffer the data, installing a new card with 8GB video RAM will not give you any extra performance boost. However, If you do not have the recommended 2 GB VRAM, the application will use the free space on the standard RAMs.

Using the standard RAM modules is inefficient, primarily due to the low intensity capacities of the memory modules. VRAMs are closer to the GPU, making it faster. This can be seen in the better performance, higher FPS, and the texture improvements when you use a good GPU with sufficient VRAM.

How To Increase Dedicated Video RAM?

If you are wondering how to get more dedicated video RAM, one of the best methods for this is to buy a new GPU with higher VRAM. Of course, you need to make sure you have decent specced CPU and RAM to avoid bottlenecking. However, the integrated graphics cards will change the VRAM according to the requirements, which means you can fake an increase without actually adding a GPU to your computer.

There are three methods to increase dedicated video RAM. Let us take a look at both of these methods, and find out the one best for you.

Method 1: Look Around In The BIOS

Although not all computers have this setting, your BIOS may have the option required to increase VRAM on your computer. This is due to the fact that your computer can take a dummy value if there is only one GPU (discrete graphics), which utilizes the RAM anyways.

The limited number of BIOS that do have this option, have this under different headers. So, you will have to look for one of the following options in your BIOS (Enter BIOS by repeatedly pressing the BIOS key usually Esc, F2 or Del).

(Also read: how to bring back F8 key to enter Safe mode instantly)

The option for VRAM allocation should be under these headers. The default value is usually 64 MB for older PCS, while the newer devices have the default at 128 MB.

If you find this setting in your BIOS, change the value to an amount that you can spare. Calculate the possible expansion by taking a look at the memory utilization, and allocating the remaining value to dedicated video RAM.

If your computer does not have a dedicated graphical processing unit with its VRAM, Windows 10 automatically adjusts the system RAM according to utilization. This is done to prevent memory freezes, which may occur during extensive graphical tasks such as 4k playback.

However, the advantage of this is that you can easily instruct Windows to show a specific amount of RAM by making a system level change. This is actually a workaround suggested by Intel themselves for games that show the following error: 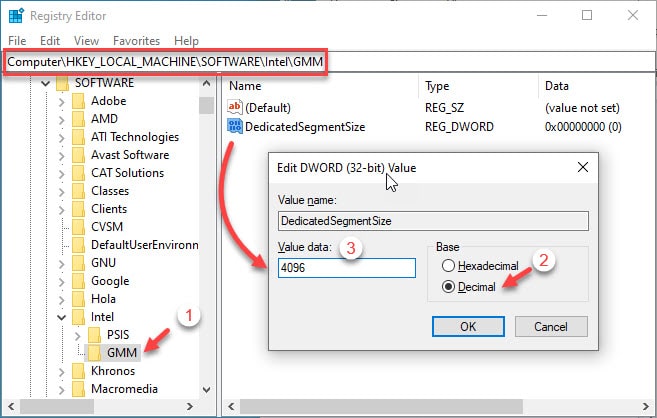 Note: This is a workaround to fool the applications into increasing the memory allocation. You may not be actually increasing dedicated video RAM on your computer. Also, you can only increase the values up to 25% of the capacity on a single stick.

While not strictly increasing VRAM, if your RAM modules are not enough to handle the graphic intensive tasks that you perform, you may want to increase the virtual memory on your computer. The page files will temporarily throw the extra data towards the storage module, releasing the load on the memory modules themselves.

Follow the steps provided in this article dealing with the ‘not enough memory’ errors in Windows 10.

So there you have it. Now you know how to increase dedicated video RAM on your Windows 10 computer using the methods provided above. While these are workarounds, you can use them temporarily to reduce the load on your computer and run the applications that you thought would not run at all. Comment below if you found this useful, and to discuss further the same.