You are here: Home / Internet / How To Change Wi-Fi Priority Windows 10?

While Windows 10 is definitely an improvement over the older versions, there are some smaller things that can annoy even the most basic users. One such feature is the ability to change Wi-Fi priority. In Windows 7, you could simply drag the networks in their order of preference, Windows 10 does not let you do that anymore.

Microsoft regularly removes many features citing unpopularity among users. That may be true to some extent, but most users would do fine without Microsoft removing such features. Removing these features seems like taking a step back, but at the end of the day, we are at the mercy of Microsoft.

In Windows 10, if you are wondering how to set Wi-Fi priority, you can do so by using the command prompt.

How To Prioritize Wi-Fi Windows 10?

Using Command line interpreters is actually very easy. If you understand what each command does, you can change almost anything within Windows 10 right from the command prompt. To set Wi-Fi priority, follow these steps: 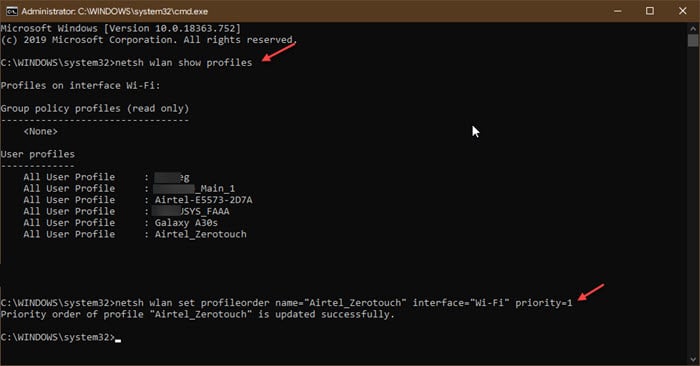 Note: Replace name_of_wifi with the name of your Wi-Fi connection, type_of_network_interface with the type of network and # with which position you want the network to be.

Although this may be a feel like a very complicated process, all you need is two commands to change Wi-Fi priority in Windows 10. Comment below if you found this useful, and to discuss further the same.